The World Through Their Eyes: The Art of William Brenton Boggs and Truman Seymour 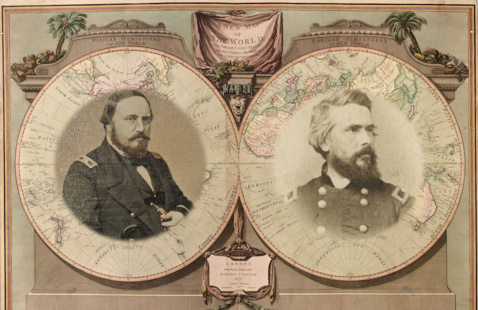 Please join the Sullivan Museum and History Center for our exhibit, The World Through Their Eyes: The Art of William Brenton Boggs and Truman Seymour, where you will be transported to the nineteenth century to see the world through the eyes of two Norwich alumni. Their art comprises scenes from North and South America, Asia, Europe, and Africa. It is truly a journey around the world.

At first glance, artists and the military seem to have very little in common. But in truth, the two have a long history together. Whether though the reconnaissance of a battlefield or planning a fortification, military academies utilized art instruction for centuries. Descriptive drawing was taught in civil engineering, architecture, fortification, mining, metallurgy, and agriculture. Drawing courses typically comprised the most practical aspects of military science such as topography, but also included drawing figures and landscapes.

Alden Partridge integrated education in art and drawing into the curriculum of the American Literary, Scientific, and Military Academy, later known as Norwich University. Throughout history there has always been an overlap between conflict and creativity. For some graduates of Norwich University, including the two artists featured in this exhibit, art became a major part of their life and how they saw the world.

William Brenton Boggs, Class of 1828, spent his career in the Navy with official duties as an artist. Boggs served as a secondary artist for the North Pacific Exploring and Surveying Expedition, also known as the Rodgers-Ringgold Expedition. Later in life, he continued his love of drawing and painting, and became recognized as a White Mountain Artist.

Truman Seymour, who began attending Norwich University in 1840 and remained at Norwich for two years before transferring to West Point, was a career soldier and served in the Mexican-American War and the U.S. Civil War. Between the wars, he was an Assistant Professor of Drawing at West Point under his mentor, and Professor of Drawing, Robert Weir. After his retirement from the Army, Seymour and his wife took the Grand Tour of Europe to pursue his passion for art. They traveled to England, France, Spain, North Africa, and Italy befriending various European artists along the way. Seymour filled his sketchbooks with scenes of the exotic places he visited and painted numerous watercolors.

The works of Boggs and Seymour will be on display at the Sullivan Museum and History Center from February 4, 2022, through December 16, 2022.