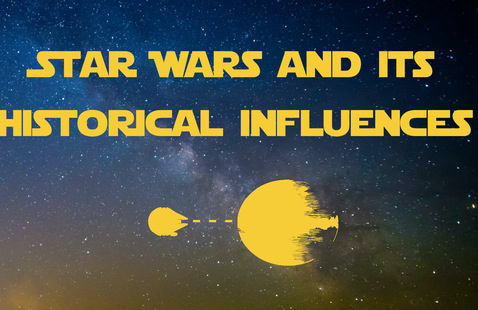 The Sullivan Museum and History Center presents the second of two science fiction themed Lunch and Learns during the month of April. Join science fiction enthusiasts Glennie Sewell and Joseph Cates as they discuss how Star Wars architect George Lucas was influenced by history, theology, mysticism, and mythology to create his science fiction universe in a virtual Lunch and Learn: Star Wars and Historical Influences will look at how Star Wars was influenced by history. Professor Glennie Sewell was a proud member of the Norwich University faculty until the COVID crisis and is in his twelfth year for Troy University (with TroyOnline) as a World Literature and Composition professor. He heads Messenger Guardians Paranormal Investigation Studios, in Montpelier, with the assistance of former Norwich graduates. Professor Sewell has used science fiction literature and film as a means to teach about the advancement of the human condition. Joseph Cates is a lifelong science fiction enthusiast and the Curator of Education and Public Programs at the Sullivan Museum. As a historian, he has studied the historical influences on science fiction.

When George Lucas developed the storyline for Star Wars and crafted his heroes and villains, he tapped into elements of theology, mysticism, and mythology as well as his knowledge of classic films. Befitting a story set a “long time ago,” real-life history also played a central role in shaping the filmmaker’s space opera. Lucas took aspects of comparative mythology, also known as the hero's journey, as the template for Star Wars. In the hero’s journey a hero goes on an adventure, is victorious in a decisive crisis, and comes home changed or transformed. In addition to the use of mythology, Star Wars prop makers were faced with the task of creating lots of futuristic-looking movie guns. Many of the weapons were repurposed weapons from World War II. They used George Lucas’s approach of drawing from history and taking existing guns and adding bits and pieces to make them look a little more as if they were advanced weapons. “Star Wars and Its Historical Influences” will look at how historical props were used to create the Star Wars universe.

At present, the museum is still closed to the public due to the pandemic. These two Lunch and Learns will be presented virtually. You can register for the webinar by typing the link below into your browser. The link will also be available on our Facebook Page.

After registering, you will receive a confirmation email containing information about joining the webinar.

Brought to you by GoToWebinar®
Webinars Made Easy®