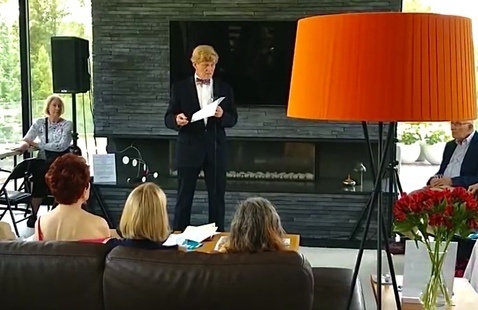 John P. Flannery, II, is a kid from the South Bronx, who attended parochial school, competed in oratorical contests, discovered magic tricks, then the real thing, science, and studied math, physics and engineering (at Fordham and Columbia).

In his first year in High School, John saw JFK in person, challenging students to make a difference in a campaign speech in 1960.  Afterwards, John had a kind of reverie prompted a lifetime of activities that were never too far away from law and politics.

After Columbia law School, where John was the Managing Editor of the Columbia Human Rights Law Review, he clerked for the US Court of Appeals for the Second Circuit (Judge Paul R. Hays), then served as a federal prosecutor in the Southern District of New York, in its Criminal Division.

John made large mob narcotics cases, was threatened, but obviously they didn’t carry out the threats, and made public corruption cases including the prosecution of a corrupt Pennsylvania Congressman, Dan Flood.

John represented all the airlines in the Air Traffic Controllers Strike when he was a senior associate at a mid-town law firm founded by Franklin Roosevelt Jr.

After that, John served as a Special Counsel to the US Senate Judiciary and Labor Committees.  On Judiciary, he uncovered a plot by fugitive financier Robert Vesco to subvert the US ban against sending C-130 transports to Qaddafi by bribing public officials, and, on the Labor Committee, John uncovered how the former Labor Secretary Ray Donovan was confirmed in large part because the FBI concealed that Donovan had mob associates that he denied having.

John returned to the Hill on the House side in 1996 and participated in several investigations including the impeachment proceedings against President Bill Clinton (we Dems thought his misconduct was not an impeachable offense).

John ran for Congress, winning 95,000 votes but still not enough votes; the voters thought John should remain a trial lawyer instead; presently, John is an elected official but not in Congress.  Otherwise, John has held various party and elected offices.

John has worked in private practice when not in public service, and finds time to write opinion pieces and to speaks his mind on network and cable and radio shows; since 2016, a lot of those opinions and talk has been criticism of former President Trump and his administration.

John and his wife Holly have a farm in Virginia, with plenty of animals.