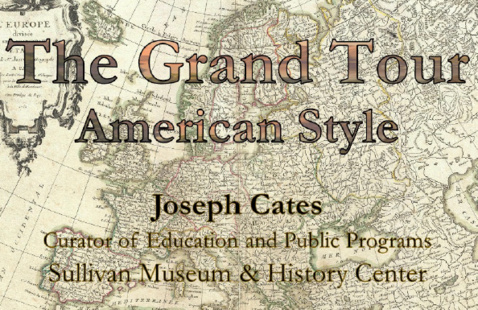 The Sullivan Museum and History Center has an exciting schedule of programs planned for our current exhibit, The World Through Their Eyes: The Art of William Brenton Boggs and Truman Seymour. In this exhibit, you will be transported to the 19th century to see the world through the eyes of two Norwich alumni. Their art comprises scenes from North and South America, Asia, Europe, and Africa. It is truly a journey around the world. To kick off our Lunch and Learn schedule, we invite you to join the Sullivan Museum’s own Curator of Education and Public Programs, Joseph Cates, as he discusses “The Grand Tour: American Style.”

Americans who traveled to Europe were not from a single European heritage, and the American Grand Tour reflected this in many ways. They felt they were the inheritors of European traditions, a heritage that formed the uniqueness of the emerging American republic. Americans did not want to merely copy European traditions but, instead, wanted to learn from classical Europe in a way that would build the foundations for a greater United States of America. Truman Seymour, class of 1844, was one of the last Americans to take the Grand Tour following in the footsteps of Europeans and fellow American since the 17th century. Seymour traveled through Great Britain, France, Germany, Austria-Hungary, Spain, Tangiers, Switzerland, and Italy.

Presenter, Joseph Cates has conducted extensive research on American artists and expatriates in Italy during the 19thcentury, including Americans who created their own version of the Grand Tour. Cates received his Bachelor of Arts degree in History from Auburn University at Montgomery, and a Master of Arts degree in American Military History from the University of Southern Mississippi (USM). He also continued his studies at USM for a Ph.D. in the cultural and intellectual history of the United States. From 2015–2018, he was the Oral History Coordinator for the Sullivan Museum. Since August 2018, he has been the Curator of Education and Public Programs for the Sullivan Museum, where he develops public programs like the Lunch and Learn series and works with Norwich University faculty to develop classroom programs.

We hope you will join us on Wednesday, February 23, 2022, at 11:30 am for “The Grand Tour: American Style,” a Sullivan Museum and History Center Lunch and Learn program. A takeaway box lunch will be provided for all attendees and masks are required for the event. Space is limited, but we will have a secondary viewing area in the museum gallery. After the presentation, we hope you will visit the Sullivan Museum and History Center’s exhibit, The World Through Their Eyes: The Art of William Brenton Boggs and Truman Seymour, where you can see some of the places Seymour visited and painted on his Grand Tour.