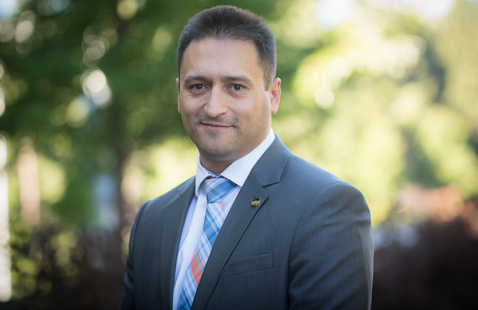 Join us for a Career Chat with David Ortiz '98.

David grew up all over the world in places like New York City, Italy, Germany, and Texas twice. He was a military brat that fell in love with the Air Force at an early age and always wanted to go a military college. He discovered Norwich when a flyer arrived at his house in 1993 and after reading about the school and meeting local alumni no other school could compete. He still considers Norwich and the Corps of Cadets one of the best decisions he has ever made. After graduation he entered the US Air Force and made a go of it as a weapons office and a physicist for about 4.5 years. What Norwich means to me: Anyone who knows him understands that Norwich is a big part of his life and he is honored to be a part of the NUAA Board. For the past few years he has made himself available to local alums in the DC area and is glad that some have found jobs and career opportunities though his connections. Pitching in to help grads who he has just met gives him a sense of connection back to The Wick. It feels like he is paying her back for all the things the Corps gave to me. Personally, he still loves meeting grads in odd places and whether you know each other or not the Ring makes you instant comrades just catching up on old war stories. Norwich will always be a part of his life. He wants other grads in the local community to realize that they are part of a very special club, with a very long line of service to each other and the Nation. He’ll do his part and continue to tell grads he helps to pay it forward to the next Norwich grad that reaches out to them for advice.

To learn more about David's career journey and the advice he has for students, register at https://norwich.joinhandshake.com/events/534433. Students will need to be logged into Handshake to access this link.