At War From Chechnya to Ukraine: 23 Putin’s years 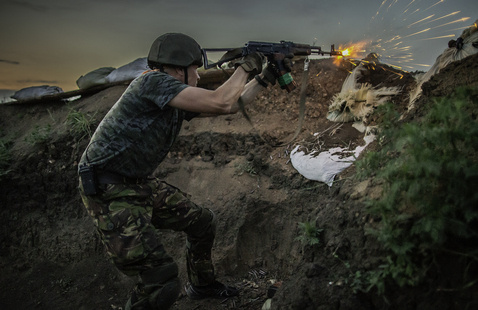 Journalistic career has taken Russian photographer Dmitry Belyakov to numerous war zones and exposed him to many close shaves. From 1994 to 2020 he covered large and small conflicts including the Chechen war, the conflict between Armenia and Azerbaijan in the Nagorno-Karabakh region, the war in Syria and the war in the Donbass area. Four out of these seven conflicts were Putin-related wars.

Period from 2002 – 2016 on assignments for Der Spiegel, Stern and Bloomberg News photo, Dmitry also photographed the President of Russia and watched carefully the transformation of a politician who put him through two decades of almost continuous work in hot spots.

Unable to return to his home country due to a storied career of turning a spotlight on the brutal excesses of Vladimir Putin and his military minions, Dmitry has landed safely in the United States where got an appointment as a research fellow at the Peace and War Center of Norwich University.

On January 30 Dmitry will present a historical portfolio of his photography works from 1999-2022, as well as give a lecture to expound upon why and when the West "lost" Russia and to share his vision of the current war waged by his own country against Ukraine.